Seemingly, every voice in deep tech has picked up megaphones, marched out on to the streets and are straining their chords to advocate the myriad virtues of DLT, which, in a way, takes every pain and strain out of the blockchain (rhyme not intended) and paves the way for a topographical, non-linear blockchain in which, hold your breath, miner fees are reduced to Nano-transactions! Directed Acyclic Graph in Blockchain has arrived, but will it stay? As we said, every deep tech expert seems to believe that it will. So without further ado, here’s a drill down into the new phenomenon sweeping the world of Blockchain and Distributed Ledger Technology.

WHAT IS DIRECTED ACYCLIC GRAPH?

In a concept derived from mathematics, a directed acyclic graph takes the linear (simple standard linked lists), in which each new transaction is put on top of the previous most recent one. The result is a line of transactions in a straight sequence (hence the name blockchain). A DAG takes the linear out of this chain and instead, replaces it with topological sequencing in which each new transaction must be validated by a predetermined number of previous transactions. This exponentially improves the speed and efficiencies of the distributed ledger, while resulting in less dependence on miners.

This is akin to a topology of transactions pointing in the same direction, but not necessarily linear in nature. It’s easier to understand when considering each of the elements of the abbreviation:

A direct in this case means that the transaction sequences, though not linear in nature, follow a particular direction or plot if charted. They are unidirectional and quite like a chart in which all transaction points are headed in one direction. Unlike traditional blockchain, the blocks don’t form a single chain, but follow multilinear paths towards a specific direction. This improves speed, efficiency, and of course the economics of the blockchain.

A key component of the DAG - Acyclic means just what it sounds like - no cycling back. In essence, no nodes of the blockchain can reference itself or be it’s own mother node. This is a crucial element considering the topography of the DAG, meaning that each of the nodes within the blockchain must branch out as mother nodes and not reference back to any of the previous nodes.

The interlaced network forms a graph like topology in which the nodes are connected to other nodes. Hence the term graph. This is again where the graph is represented differently from a linear blockchain of yore. 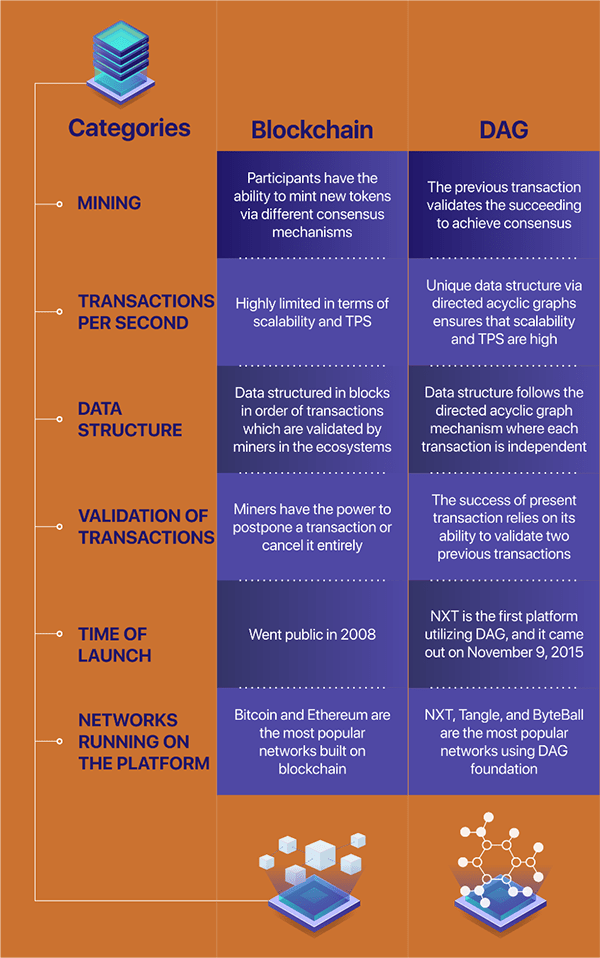 There’s a reason DAG DLT technology is being hailed as blockchain 3.0, applicable mainly to the IoT driven world and semi-public ledger at enterprise scale. The most important benefits, perhaps, lie in eliminating the miners, the mainstay of the entire blockchain mining process, entirely, facilitating Nano transactions instead. As the above metric shows, DAG does not need participating minors to validate transactions, significantly increasing mining speed, neither is consensus required from them. This is instead garnered from previous transaction values.

TPS has long been a pain in the neck for private and public blockchains, simply because they were too resource heavy. DAG solves this problem almost completely by its singular data structure that scalability remains at maximum possible levels and TPS throughputs are higher than they could ever be on an ordinary blockchain.

Data Structures are dependent on existing blocks in the blockchain and are also one of the primary reasons of excess resource consumption, since the blocks need to be miner-validated. The DAG takes the miners out of the equation making each transaction independent of miners and based only on a previous transaction.

If blockchain 1.0 belonged to decentralized currencies and hackers, blockchain 3.0 relies almost entirely on autonomous process validation and transaction processing, alongside airtight security and enterprise and governance applications. It’s no wonder that blockchain developers in the newer technology platforms were the second most sought after jobs in 2019, according to LinkedIn, next only to Artificial Intelligence specialists. Get upskilled, get certified from the world’s leading authority on blockchain technology platforms now, and stay ahead of the curve of your peers clamoring their way through crypto technologies that have long since faded into oblivion. The time to act is now. Get there, steady.